In a voice-over echoing the one at the beginning of How to Train Your Dragon, Hiccup (voice: Jay Baruchel) describes ... 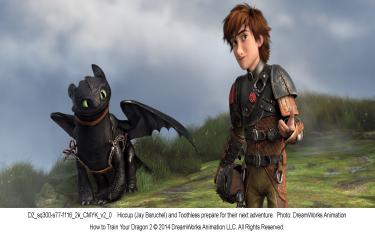 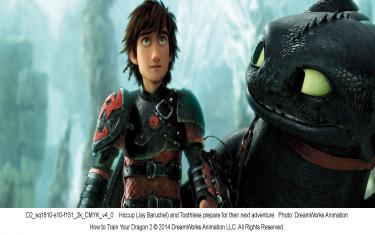 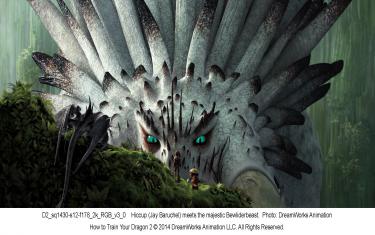 Show full gallery
File Size
1.65GB
Duration
1h 42min
Languages
English
Quality
720P
Story
In a voice-over echoing the one at the beginning of How to Train Your Dragon, Hiccup (voice: Jay Baruchel) describes his home, the Viking village of Berk. Five years after the events of the previous film, Berk is a much happier place. Instead of stealing the livestock and destroying buildings, dragons now live amongst the villagers as working animals and companions, and even take part in racing sport. In the opening scene, dragons and their riders compete to catch sheep and dunk them in baskets; everyone in the village who isnt competing seems to be watching the event. The chieftain, Stoick the Vast (voice: Gerard Butler), wonders where his son Hiccup is but exults when Astrid (voice: America Ferrera) and her dragon Stormfly win the game, calling Astrid his future daughter-in-law.Hiccup, meanwhile, is exploring with his dragon, Toothless, intent on discovering and mapping new lands. Hiccup tries out a set of leather wings hes rigged that stretch from his extended arms to the sides of his legs and enable him to jump off Toothlesss back and fly -- glide, really. They work well, though the landing is rough because Hiccup doesnt watch where hes going.While investigating a wildfire, Hiccup and Astrid discover the remains of a fort encased in a colossal ice formation and encounter a dragon trapper named Eret (voice: Kit Harington), who blames them for the destruction of his fort. He says the the fort was frozen and destroyed by another dragon rider who he assumes there in league with. Eret attempts to capture their dragons for an insane conqueror called Drago Bludvist (voice: Djimon Hounsou). Hiccup and Astrid are mystified; theyve never heard of dragon riders except for the ones from Berk. The two riders return to warn Stoick about the dragon army that Drago is amassing. Hiccup has trouble getting Stoick to listen; Stoick wants Hiccup to succeed him as chieftain, but Hiccup, at 20, isnt ready to think about it.Once he grasps what Hiccup is saying, Stoick puts the village in lockdown, ordering the villagers to fortify the island and prepare for battle. Stoick explains he met Drago years before and that he was an unreasonable madman, but Hiccup refuses to believe that war is inevitable. Defying his father, he flies off with Astrid to find Erets ship and they surrender themselves and their dragons so as to be taken to Drago. Stoick, Gobber (voice: Craig Ferguson), and Berks other dragon riders pursue and find them, but Hiccup and Toothless fly off again.They are captured by a skilled dragon rider named Valka (voice: Cate Blanchett), who recognizes Hiccup. She reveals that shes his long-lost mother; she was taken by a dragon when Hiccup was a baby and was thought to be dead. She explains that she had tried to convince Stoick and the rest of Berk that they could learn to coexist with dragons. One night during an attack, a dragon got into her house and she rushed to save the infant Hiccup, but found the dragon, Cloudjumper, making googly eyes at the delighted baby. Though she had come armed and was fully prepared to put aside her ideas about the gentleness of dragons to defend her son, she couldnt bring herself to attack Cloudjumper, who instead carried her off. Valka spent the next twenty years rescuing dragons from Dragos traps and bringing them to an island haven created out of ice by a colossal Alpha dragon called a Bewilderbeast, to whom all dragons answer. Valka is eager to share what shes learned with Hiccup; she shows him and Toothless how to deploy a double row of small fins on Toothlesss back that enable him to make tighter turns. Later, when Hiccup shows her the map hes been working on, adding new lands as he discovers them, she draws him a larger map in the snow.Stoick and Gobber track Hiccup to Valkas island, where Stoick discovers that his wife is still alive. They have a joyful reunion.Astrid and the other riders kidnap Eret so as to find Drago, but they are also captured and Drago thus learns of Berks dragons. Ruffnut (vo
available subtitles (you can download them from above!)
Arabic || English || Portuguese (BR) || Dutch || Finnish || German || Serbian || Polish || Brazilian || Portuguese || Chinese (simplified) || Chinese + English || Chinese (traditional) || Hebrew || Arabic || Croatian || Turkish || Hungarian || Italian || Indonesian || Estonian || Lithuanian || Slovak || Swedish || French || Spanish || Greek || Danish || Hindi || Romanian || Norwegian || Vietnamese || Icelandic || Bulgarian || Czech || Ukrainian || Latvian || Thai || Slovenian || Malay || Persian || Kazakh || Russian
Notes:
- you can download movie and subtitles from the above button 'Download Now'.
- the above download button is REAL! we're using here Adshrink service!
- We Are human, and we may make mistakes, please report below if there is an error.
Keywords:

New update on retiring and extension of service 03/08/2022. For more information, click here.